Firstly, I'd like to say that this is an opinion piece rather than a research article, although I have tried to reference academic expertise for anyone who would like to delve more deeply into this. Climate change denial is not my area of expertise although I'm fascinated with communication around climate issues and the key role conversations and media portrayals have, in tackling what is not just a scientific problem, but a social and economic problem.

The good news is that climate deniers are very much in a minority. In Ireland 96% of people believe that climate change is happening.[1]

[1] EPA: Climate Change in the Irish Mind
Similarly, research done by Yale[2] in the United States shows that just 9% of people are dismissive of climate change.
The '6 Americas' research is interesting because it captures the wide variety of responses to climate change and the nuanced views on this topic really need to be contextualised within a social context.
[2] 6 Americas
The bad news, I suppose, is that those who are invested in denying climate can often be the most vociferous on social media, which can give a skewed perspective of the larger picture, and lead to an overall impression that climate denial is much more prevalent than it is.  Whilst it's important to remember that many may question climate change based on hearsay or simplistic binary frames that have been presented by the media, there is also a cohort who are deeply embedded in this denial and will actively try to spread it as widely as possible. There are a few different reasons for this - one is that the fossil fuel industry and 'think tanks' like the Heartland Institute, who are largely backed by a very conservative element in society, invest heavily in dissemination of doubt. Robert Brulle, who conducted a study in 2013, which showed that over $125m was spent over 3 years on climate misinformation, describes this as

'a well-oiled, complicated, cultural and political machine of the right wing of the conservative movement.'

Although outright climate denial is becoming more and more difficult to stand over, new techniques as described by Michael Mann[3] are 'deflection, delay, division, despair mongering, doomism.'
[3] Climate Deniers Shift Tactics
These techniques regularly play out over social media, and in the news, with messages like 'we need to think about homelessness first', 'scientists disagree about climate change', 'climate change activists are anti rural or anti farmer'.  The divisions and the deflections can be a very powerful tool, particularly given the complexity of climate science.  It should be noted, also, that those who advocate and share their climate knowledge can often be attacked in a deliberate and consistent way. It seems likely to me that this can work as a deterrent for those who would maybe like to share more openly or frequently, because not everyone is equipped to deal with an onslaught of negativity or agression in online public spaces.
John Cook, in an article from 2017[4] says that:

'Science denial causes a range of damaging impacts on society. This is particularly the case with climate science denial, which has resulted in strong polarization around a non-controversial scientific issue, and prolific dissemination of climate misinformation.'

Cook discusses the term 'climate sceptic' which he critiques as being invalid, as true scepticism involves an evidence based approach, as opposed to climate denialism,

'which involves denial of inconvenient evidence and eager adoption of pseudo-scientific arguments if they support preconceptions.

He goes on to discuss the connection of acceptance of climate science with political affiliation, which he says has a greater influence than other factors, such as gender, race or economic status, and outlines that:

'Climate science denial is not a coherent, evidence-based worldview—rather, it is a collection of rhetorical arguments pursuing political objectives.'

Countering this denial and misinformation is not an easy task. For some people the misinformation becomes an integral part of their world view, and trying to dislodge this can have a negative effect. Cook suggests than critical thinking and inoculation are useful tools.These perhaps are not so useful in day to day conversations (see original article for details) but are probably techniques that should be employed widely in educational settings.

Rather than a direct countering of the misinformation, or adding an overload of scientific information, it's sometimes effective to provide a simple factual explanation that reframes the issue.  Personally, I think the semantics contained within misinformation arguments can also be challenged. I would sometimes question why a particular topic is being looked at in a certain light, and suggest an alternative. Fortunately (or unfortunately!),  those who are spreading climate denial are often working off a rehearsed playlist of phrases and ideas, and it can be relatively easy to uncover the lack of solidity behind them. It should be stressed though, that entering into arguments with climate deniers is generally not very productive as they aren't going to shift their world view, but it is necessary sometimes, if others are a witness to their 'fake news', that the position is corrected somewhat.
Katherine Hayhoe, who is the author of 'Saving Us' and who is an excellent source of information for climate communication, put it well in the following tweet below: 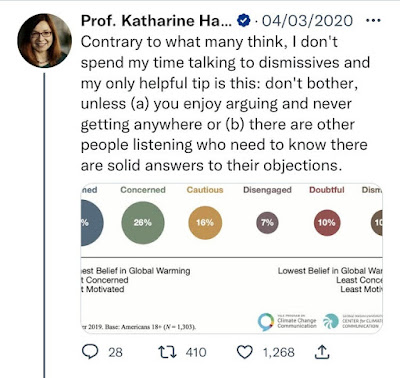 In conclusion, although the title of this blog may be somewhat misleading, given that combatting climate denial is not a straightforward exercise, having a greater critical awareness of the context and sources of climate denial is a crucial part of tackling this problem.  This denial is often firmly situated within wider global political agendas, and is well funded and deliberate much of the time.  The links with conspiracy theories and right wing politics are also well documented, as referenced in this article - Climate Change Denial Strongly Linked to Right Wing Nationalism
Having a cognisance of this, regardless of our own political beliefs, and being able to separate the science from the fake narratives, is vital to remaining clear about the precarious position our planet is in currently.  And whilst it may not be worthwhile directly challenging the climate deniers, it is absolutely worthwhile to have conversations around climate change and to spread knowledge as much as possible.
climate denial environment environmentalism
Previous Post
No Comment
Add Comment
comment url
climate action,climate communication,climate crisis,climate denial,environment,environmentalism