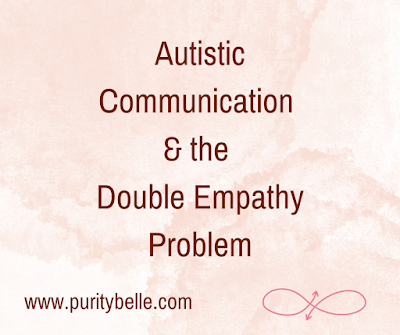 'The ‘double empathy problem’: a disjuncture in reciprocity between two differently disposed social actors which becomes more marked the wider the disjuncture in dispositional perceptions of the lifeworld – perceived as a breach in the ‘natural attitude’ of what constitutes ‘social reality’ for ‘non-autistic spectrum’ people and yet an everyday and often traumatic experience for ‘autistic people’. (Author’s concept and definition)' Damian E.M. Milton (2012) On the ontological status of autism: the ‘double empathy problem’, Disability & Society, 27:6, 883-887, DOI: 10.1080/09687599.2012.710008

The above is a quote from Milton, who coined the phrase 'the double empathy problem'. Put simply, it refers to the fact the communication is a two way street and when perceptions and realities are different, both parties within the communication will experience difficulty.  What Milton highlights, however, is the pathologisation of autistic communication and he goes on to say:

'Autism is not just an ‘invisible disability’ to many in terms of a behavioural definition; the ‘autistic voice’ is made ‘invisible’ within the current culture of how knowledge is produced about ‘autistic people’, often excluding empowered ‘autistic advocates’ from the process.'

Essentially, as I see it, the double empathy problem has a couple of layers; firstly the mismatch in communication styles (which could occur even between two neurotypical people) but also the social assumption that there are 'norms' of communication and that the difficulties autistic people have with these norms is therefore a deficit. There is a much bigger picture in terms of general stigmatisation and medicalisation of autism but the differences in communication style can create a lot of misunderstanding and misinterpretation within human interactions, with the autistic person often taking the brunt of the emotional consequences of this.

For me, language has been a focused interest of mine from a very early age. I've always been fascinated with language and words, and read avidly from childhood.  I went on to do my degree in French and Old English, with linguistics being a component of that.  I communicate carefully, choosing each word or phrase for its exact relevance to what I'm trying to relay.  My lifelong experience, however, has been that many people who are of the predominant neurotype, tend not to hear the words I'm using, but instead extrapolate a general meaning which is not what I intended at all.  I feel that this connects also to the idea of 'bottom up' thinking which is common to autistic people.

Jae L speaks about this here and describes it as follows:

'Bottom-up thinking is when people take in and process details in order to arrive at a conclusion. Top-down thinking works by people relating what they see to prior knowledge and experience rather than focusing on the details.'

This tendancy to use top down thinking makes it a lot easier to do some things, as a lot of the extra information processing experienced by autistic people is absent.  However, in my own communications, the lack of alignment between the two approaches can lead to huge frustration for me at times.  People can make assumptions and bracket what I say into what their own experience is, giving an inaccurate picture of what I'm actually trying to convey.  Put this into the context of autistic people often being misunderstood or shamed/bullied for their differences in behaviour and it's easy to see why autistic people can struggle with friendships or other relationships.

Also, of course, communication isn't static and I find that if I'm feeling close to meltdown or my brain has become overloaded because of sensory processing difficulties, or other issues, I can really struggle to communicate clearly and to tie together the myriad of ideas that are circling in my head.  I can also have a very emotional response to being misunderstood or perceive it as a form of rejection and it can create a huge sense of isolation.

Rachel Cullen has put forward an idea called the 'Autistic Language Hypothesis' which suggests that autistic people have a different system of communication and you can see an outline of the theory behind this in the graphics below. 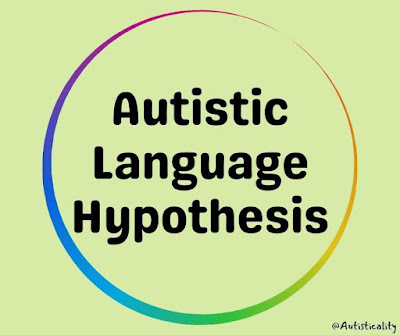 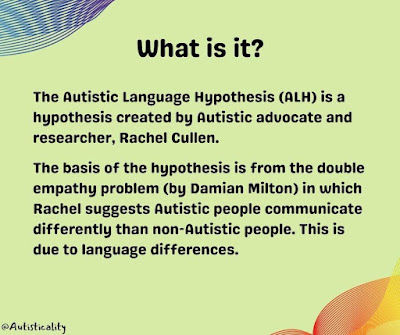 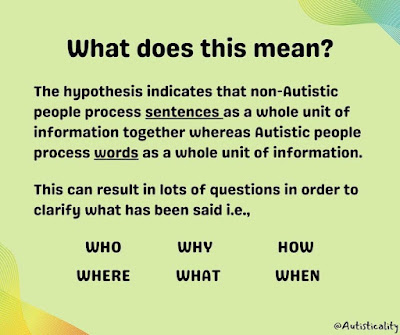 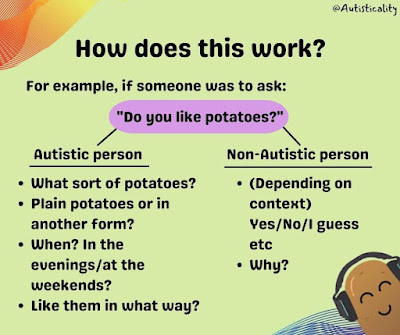 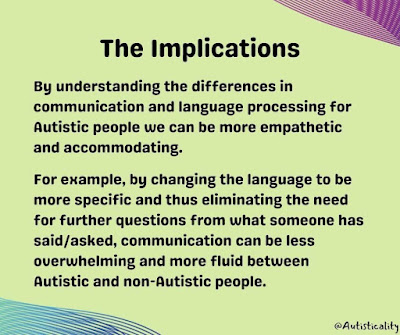 These graphics very much resonated with me - I tend to focus on words and details, and in quite a logical way.  Instructions or suggestions that are vague can be quite stressful for me, particularly when I was younger, as I wouldn't quite understand what was required and felt hesitant to ask as I thought it was somehow my fault that I wasn't getting it.  Now, with the benefit of an autism diagnosis, and with the greater confidence age brings, I don't worry anymore about asking too many questions.  I need the clarity and it would be amazing to have a greater understanding and awareness around this, so that non autistic people could maybe adjust to a more detailed way of communicating, in order to make it easier for those of us who need that.
This post, of course, is just touching on what is a very extensive topic, but hopefully it has shed some light on how autistic people and non autistic people can communicate differently.
communication double empathy problem late diagnosed autistic Milton
Next Post Previous Post
No Comment
Add Comment
comment url
Autism,Autistic,autistic communication,communication,double empathy problem,late diagnosed autistic,Milton