This is just a 'me' post. To get the background you need to check out my carotid artery dissection original post. It's now 3 weeks and 2 days since my initial headache and I'm struggling. Yesterday my head almost felt ok, all I had was a vaguely 'hungover' malaise but a definite improvement on previous days. I felt a little bit of optimism, a sense that it was going to get better, that I was, in fact, getting better.


Today, though, I woke early (as is usual for me), did lots of stuff, wrote a blog post but felt slightly off. My head was fuzzy and I found it hard to write, looked at words and had no idea whether they were spelled correctly or not. I was tired after limited screen time and couldn't focus my head or my eyes. Later in the day, my left eye started to feel heavy and when I looked in the mirror, I could see that the droopiness linked to the horner's syndrome had come back. ( A strong sign of my carotid artery dissection originally).
I was reading on my FB support group that a CAD can be classified as a mild traumatic brain injury and there can be lots of issues for some time after it happens.


It's hard to describe the 'brain fog' I have right now, everything seems difficult - I'm doing all my normal stuff on autopilot to some degree but anything that requires forward planning or schedules or any kind of complicated thought, seems impossible to me. And I panic. Panic at the thought that I'm not at my usual level of intelligence, panic that I won't be able to cope with work or things in the future. And most of all, I desperately miss my Dad. Maybe it's just the timing, that his death is really sinking in now - or perhaps it's that I feel vulnerable and Dad was always one of those solid calm people who would make you feel that everything would be ok. I could really have done with him right now.


I hate to feel vulnerable at the best of times and coupled with that is a kind of bewilderment. I don't really know what's going on inside my brain. I don't think the droopy eye is a bad sign necessarily but everything that goes wrong makes me terrified of having a stroke. I was incredibly lucky not to have had a stroke in the first place and it almost feels like I'm cheating fate. I sneezed today and actually waited for some awful consequence. I worry about stretching to put things on a high shelf , twisting to look behind me in the car, lifting anything. Craziness for someone like me, who takes pride in being strong. Today though, I'm not feeling strong.


And funnily enough, I'm sure I look and seem totally normal. I've been experimenting with hairstyles and painting my toenails and doing endless frivolous things to distract me from the fear and the pain and the lonely feelings and possibly look more rested than usual so I don't think that I look like someone who is ill at all!


Right now I'm tired again so going to sign off but if you do get to read this, thanks for listening and it's been pretty good therapy to write it all down :)
Back to normal posts asap!

The image below is from a very useful article on the Bupa website about Cartotid Artery Dissection which you can read here. 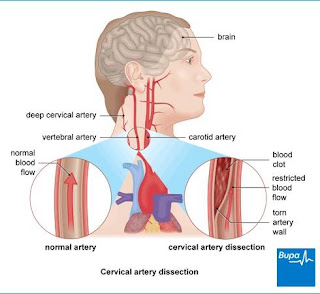 
And me with the droopy eye, not feeling so great! 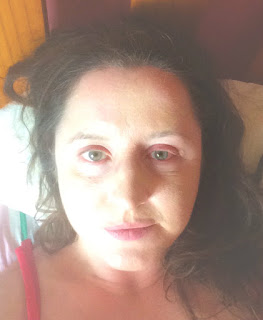