So it has been 20 months since my Carotid Artery Dissection and I thought it was time to do an update, especially for the benefit of anyone who has been through this experience, rare though we are! It seems funny reading my original post about my diagnosis as I really had no idea of what lay ahead or of how hard I would find things.
The first year after it happened, my whole life really was dominated by the event, I struggled hugely with all the side effects like crippling fatigue, head pain, eye soreness. I wrote about some of it in this Struggles with being ill post.


In November of 2015 I had a follow on appointment where I got the all clear to exercise again, this was a huge moment for me and I wrote about it here. It was a definite turning point although I still had a long way to go!
I updated at 10 Months and reading now, I was still feeling the awful fatigue, although things were getting better.

For me, around the 12 month mark was when I started to feel almost normal again. Energy levels returned to nearly pre CAD levels which was such an enormous relief. It's very hard to describe living with fatigue - even the smallest things can wipe your energy and getting through each day when the exhaustion hits, is like trying to climb a mountain, you just feel like you won't be able to get through it.

Things have continued to improve and I had my final hospital check up last week. I was discharged! Things look good, I have managed to reduce my cholesterol through diet and exercise and all that remains is my Horner's Syndrome.  The picture below is from my original diagnosis and, although I have days where it appears fine, even now my eye  is often very droopy and puffy.
And this is a pure vanity thing, but I noticed recently that the area around my left eye seems a lot more wrinkly than the other side, bah! 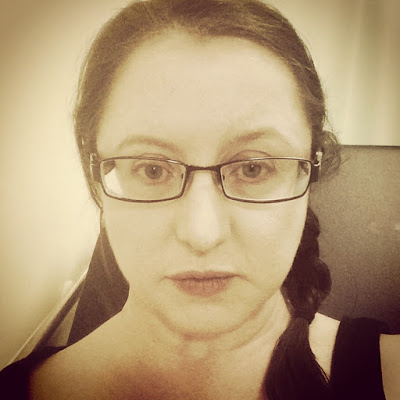 And a later picture, not much difference really -

Some days my droopy eye looks bad, I usually wear glasses so I don't notice so much but I could really notice the difference between my eyes with lenses in - my left eye is my #hornerssyndrome eye. #carotidarterydissection #eye #irish#irishigers #selfie #insta_ireland #gf_ireland #gf_daily #primeshots #photowall #ig_captures #ig_worldclub #carotidarteries #carotidartery
A post shared by Purity Belle Candles by Cliona (@puritybelleblog) on Jul 25, 2016 at 2:50pm PDT

Unfortunately, this is something I'm stuck with for life, as well as having to take aspirin. My artery healed well but the way it healed created a narrower passage for the blood flow (kind of like scar tissue I guess). So I do need to be aware of this and continue to maintain safe levels of blood pressure and cholesterol.

Still, I've realised lately how incredibly lucky I was, not to have had a stroke. My life would have been much different and a lot harder, so in a weird way I have been fortunate.
From the perspective of where I am now, I can see the path of recovery quite clearly and it's something I would like to put behind me in many ways.
On the other hand, I have now also become aware of the psychological impact of this event in my life. Perhaps because it was part of a succession of difficult things (my Dad had passed away a month before the dissection and my daughter was hospitalised several times afterwards for Ulcerative Colitis), I became quite traumatised (for want of a better word). I began at times to see death everywhere and experienced a lot of panic and fear. I think perhaps this is the residue that never goes away. I feel like I've lost some of my smile, can't really describe it any other way, it's as though the reality of my close escape and knowledge that my condition could have led to death has left me a bit paralysed. I certainly never expected in a million years that I would have to confront that at 47 when I still felt very much young.
I imagine this must be the same for anyone coping with a serious illness and unfortunately, it's not something that is acknowledged or discussed by doctors.  And in the case of Carotid Artery Dissection, there is still a lack of knowledge which I hope will change in times to come because so many patients are sent away with an aspirin prescription and no information about the myriad of symptoms that come with this condition.

So I guess what I would say to anyone going through this, is take it easy on yourself, allow time to heal and get lots of rest. And above all, it does get better, bit by bit.

An invaluable resource for me right from the start was the Carotid Artery Dissection Facebook Group.
It gave me answers to my questions, and sympathy and comfort from people in the same boat.
Let me know in the comments if you have had to deal with illness, would love to hear from you.