I've been experimenting with some Halloween themed baking and treat making - it's never an easy task trying to find nut free treats and the majority of seasonal goodies that appear everywhere  have a nut warning which rules them out for us.  Also because of Izzy's egg allergy, most baked goods are out of the question too (and many have a nut warning anyway!)

I'd had an idea to make chocolates myself and lo and behold in Lidl this week they had some cool Halloween ice-cube makers so it seemed like fate :)

I used a combination of cooking chocolate and Maltesers 'Teasers' bars - cooking chocolate isn't super gourmet exactly but it melts well and is economical if you need to melt a lot. You can use any chocolate, of course, that will melt easily and is nut free if you have allergies to consider. 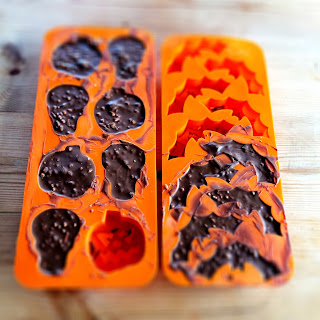 I put some orange sprinkles at the bottom of the trays before pouring the chocolate (which was melted in a bowl over a saucepan of boiling water).

As you can see it looks pretty messy but this doesn't affect the final product at all so don't be worried if you get chocolate everywhere!

We removed a pumpkin for a taste test and it was pretty good :) 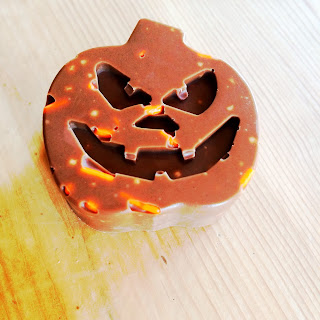 And here are the others 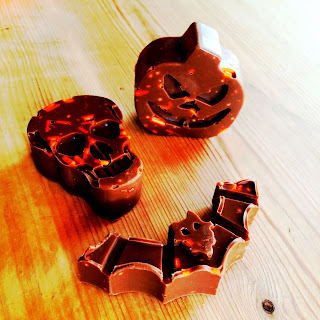 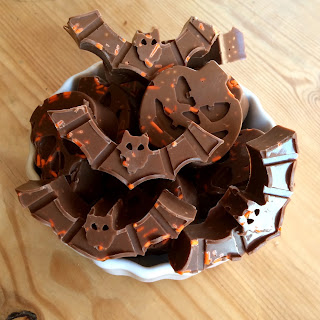 Next up were some cupcakes - I found this recipe just by googling a while back and it's from simplyrecipes.com.  I've made them a few times and they really are deliciously moist and tasty.
It's american so uses cup measures which I always find really handy and it's a straightforward mixing of dry ingredients and wet ingredients separately and then combining.  The egg substitution here is vinegar and baking soda, it works really well. They rise beautifully and are spongy and don't fall apart too easily which can often be a problem with egg free baking.
The recipes says that it will make 12 cupcakes - I have been using muffin cases so get just 9 which is fine. 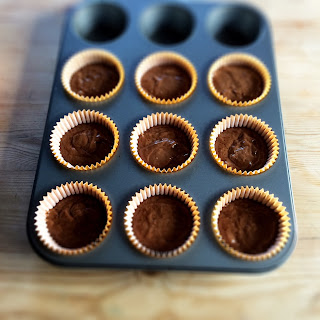 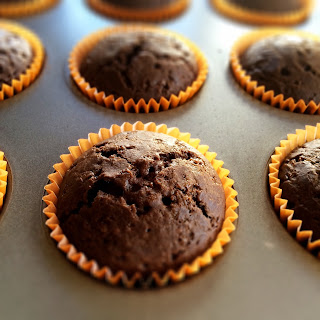 As I said, they are super easy to make - one tip though - the recipes states to put on middle shelf of oven. I find that it takes longer than the 20 min to bake if I do this. Putting them on the top shelf works for me but it probably depends on your own oven so you can experiment with this.

I iced them using the Lidl biscuit press - I had one of these ages ago and used it all the time but lost one of the connectors for it so I was really happy to see that they were back in stock. If you're like me and are completely hopeless at using an icing bag, you seriously have to get one of these. Although it's a biscuit press, it's also brilliant for icing and has loads of nozzzles, is incredibly easy to use and most importantly (for me anyway!) is that it's dishwasher safe. 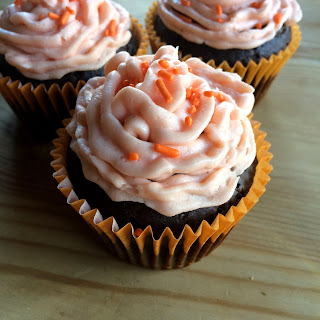 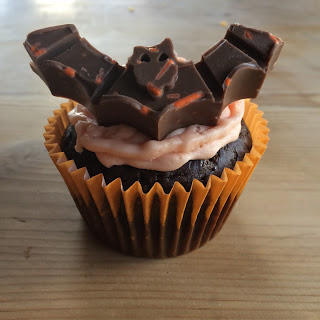 The icing is just 4oz butter and 10oz icing sugar mixed together with a couple of dessert spoons of orange juice and a combination of red and yellow food colouring.

And that's it for today - I did also make egg free chocolate chip cookies but I'll save that for another day :) Have a Happy Halloween everyone! 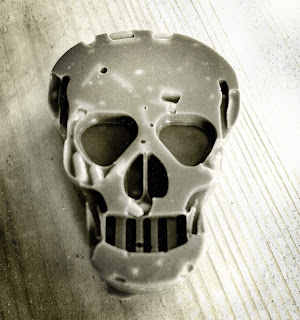 (Disclaimer: Although I have mentioned Lidl and Lidl products a few times, this isn't a sponsored post, I just like the products and use them myself.) 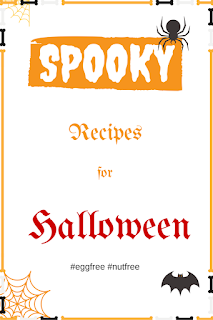