I have been thinking lately about the power of communication, mainly in terms of social change and how we need to unify, particularly around climate action, which is becoming more and more urgent by the week and day even. The power of talking about things is immeasurable, it gives us space to contextualise our feelings and to make sense of the randomness and speed with which life changes around us.  It provides the endorphin release of companionship and shared values but it also allows us (assuming we are open to it) to hear and understand other viewpoints and to find a way to fit those into our own narrative.  William N. Isaacs says that dialogue creates ‘a special environment in which the tacit, fragmented forces that guide how people think and act can begin to be perceived and inquired into, and the underlying patterns of influence can be shifted.' (The Process and Potential of Dialogue in Social Change). 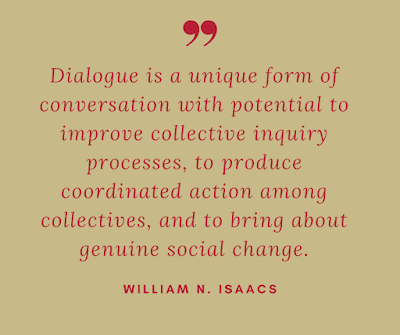 I have been observing in my own life and activities lately, how people communicate and how ideals of dialogue can work to overcome differences of opinion and achieve progress in terms of moving forward from a static state to a somewhat new way of action.  I have also seen, however, that this process of dialogue can fall at the first hurdle and I have some thoughts on why this can occur.  As Isaacs says, ‘the dissolution of boundaries and the reframing of old problems can be deeply threatening and destabilizing.’
Essentially, in my experience, the process of listening and engaging in true dialogue – which by its definition, requires real participation from all parties, is unlikely to happen if one of the following are present:

My sense is that the first is perhaps less common now than in the past, as rigidly formal organisations have evolved to a more relaxed way of doing things. Nonetheless, there are still those who place a value on hierarchy and rely on superficial status definitions as the yardstick for engagement.  This can be very limiting when it comes to approaching dialogic interactions in an open way.

Social and cultural separations are far more common and, in a way, this is normal enough. We all try to find safety in our own social groupings and this only becomes a barrier when we aren’t willing to moving a little outside of that grouping.  It can also be a very substantial barrier if the sense of belonging to one social grouping is very entrenched and leads to a negative attitude to others. This can manifest as extremes like racism or prejudice based on gender or age, but can also be simply an unwillingness to work well with others who don’t mirror ourselves.

The third is a difficulty because dialogue and engagement on issues have to be dynamic. Where organisations allow structures to become stagnant, the motivation to change dwindles until the forums become a ‘groundhog day’, jaded repetition of what has gone before. There is also a danger that new ideas or insights will be defeated or subsumed into the habits that have long been entrenched and that any kind of progressive change will be halted.

So, is there a way to combat the obstacles mentioned above? I think there are a couple of ways that I can see. Firstly, in one off events where dialogue or participation are required, the presence of a facilitator is of huge benefit. I’ve experienced first hand how a good facilitator can guide the process, and draw out ideas in a positive way. Facilitators can also rebalance the input in terms of extroverts and introverts and weigh input from each equally, as well as balancing input across gender divides.
Where events or meetings are a regular occurrence, this presents more of a difficulty. My feeling is that outlining shared goals, and the process of how they might come about, is one option. However, this is not as straightforward as it seems, as members of the grouping might change frequently or again, as mentioned above, there may be a culture which doesn’t allow change.  One potential way to combat this (although it might be a slow way) is to put words to the theory on a frequent basis, i.e. to articulate the notion of dialogue and cooperation. To quote Bohm:

‘if people are to cooperate (i.e., literally to “work together”) they have to be able to create something in common, something that takes shape in their mutual discussions and actions, rather than something that is conveyed from one person who acts as an authority to the others, who act as passive instruments of this authority’.  So speaking about common ground can build those relationships and engender positive interaction.

There is no doubt in my mind that open dialogue is the best way to interact, both in institutions and organisations.  According to Dryzek ‘for problems of any degree of complexity, the relevant knowledge cannot be centralized in the hands of any individual of any administrative state structure.  Thus problem solving should be a flexible process involving many voices, and cooperation across a plurality of perspectives’. (Dryzek, The Politics of the Earth, 2013, p. 100.)

It is the 'many voices aspect' and the dynamism ('the quality of being characterized by vigorous activity and progress') which make deliberative dialogue a key factor in creating social change. Deliberation and dialogue, in a democratic setting, can push progress and action forward more quickly than hierarchical 'top down' decision making models.  According to James A. Fishkin (When the People Speak, Deliberative Democracy and Public Consultation):

'Democratic deliberation is about questions of collective political will - about what should be done.  It is about arriving at views that represent collective, informed consent'.

It's the 'collective consent' that is key - it can be difficult to reach consensus in decision making processes but dialogue allows for that breaking down of barriers and preconceptions and makes the space for difference, essentially creating something new out of disparate perspectives without any of the participants 'losing' anything of who they are.  This is likely to lead to a much more positive and full acceptance of change and progress.  Implementing dialogue as a fundamental part of decision making processes can be done at so many levels, both local and national, in small and large groups and any type of organisation and it is my belief that creating that dialogue 'habit' can only lead to better things.