(*This blog post was previously submitted as an essy assignment as part of my DCU Masters, I've changed the wording very slightly in parts and have omitted my lengthy reference list but it is available if anyone would like to see it). 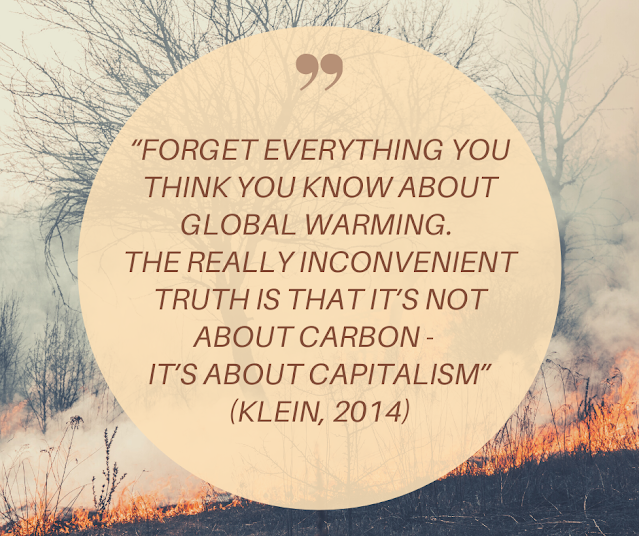 Consumption and use of materials is another issue. Growth needs more materials and more energy and unless every industry and production method can be switched to a circular model, the problems of waste and emissions remain. According to Dietrich et al, a ‘business as usual’ scenario would mean that humans would require 180 billion tonnes of materials by 2050. Similarly, the UNEP 2014 Report outlines that ‘during the 20th Century, extraction of construction extraction of construction minerals grew by a factor of 34, industrial ores and minerals by a factor of 27, fossil fuels by a factor of 12 and biomass by a factor of 3.6. The total material extraction increased by a factor of about 8 to support a 23-fold GDP growth’. In the same report the comparison between developed and developing countries is shown, with resource use as high as 30/40 tonnes per person per year in developed countries compared to a much tinier figure of 2 tonnes per person per year in developing countries. If we assume that in the interests of social justice, developing countries have a right to a standard of life similar to that of developed countries, then a growth economy implies more resource usage, not less. As the resource mining to date has put a heavy burden on the environment, then it is difficult to reconcile further extraction of resources with addressing the environmental crisis.
What really is the crux of the matter, though, is that capitalism itself is the problem. If the behavioural and motivational elements of ensuring that change occurs are factored in, the current power imbalance is a very large disincentive to the vested interests who have become extremely wealthy on the back of destroying the environment. The difficulties lie in a system which enormously benefits the few who have influence and capital. Fossil fuel companies have spent millions on disinformation campaigns and on lobbying and creating a smokescreen around the whole area of global warming, although they were fully aware from the beginning of the nature of the problem (Heede, 2019). Free market profiteering, in general, has led to social inequality as well as a massive depletion of natural resources and a degradation of soil. Consumerist culture drives a constant quest for the new and everything becomes quickly replaceable, creating an ever increasing mountain of waste. One of the most extraordinary aspects of this mass cognitive dissonance is the fact that the very industries who are causing the problem, are actually being subsidised by governments around the world, including Ireland where €2.4 billion in subsidies was provided in 2018 (Burke-Kennedy, 2020). This suggests that States may not always act in the interests of their citizens.

Thus the truth is, indeed, very inconvenient for some. However, there is a growing recognition that alternatives are available. Naomi Klein spoke recently about ‘ideas lying around’ (which was originally a quote from Milton Friedman) in her Democracy Now Video Interview in March 2020. The ‘ideas lying around’ can lead to greater inequality or alternatively, can be oriented towards a complete shift in thinking and living. One such idea, or set of ideas, is degrowth, which has been around for some time and originated in the 1970s with the economist Nicholas Georgescu-Roegen. It went on to be adopted by many more academics in different fields and the first degrowth conference was held in Paris in 2008. Degrowth is not a prescribed set of principles but rather an umbrella movement which advocates a different value system, placing greater emphasis on human and environmental well-being. As the title suggests, it is also advocating a ‘decrease’ or winding down of how we live and what we consume. Proponents of degrowth would challenge the ability of sustainable development to solve the ecological crisis and would challenge also, the utilitarian basis of capitalism. It also broadly embraces a more holistic view of humanity, allowing for deeper motivations and social capital (Demaria, 2013). It is critical of the consumerist profit driven lifestyles that arise from capitalism and acknowledges the Easterlin Paradox which states that improved income does not equal improved happiness. Degrowth is perhaps not an answer but rather a signpost that there are new roads to travel and new territories to be explored, in a way that may improve our lives and allow the planet to heal. One of the elements of degrowth is the idea of redistribution of wealth. In order to rebalance world wealth, it is necessary to acknowledge the role of geopolitics and colonisation in our currently unequal system. Wealth in the north has often been acquired at the expense of the global south so from a social justice perspective, redistribution is a means of balancing and removing the need for pressures around economic growth (Hickel, 2019).

Another concept which fits well under the degrowth umbrella is doughnut economics which originated with Kate Raworth. Called doughnut economics because of the circles which are part of the colourful visual attached to the theory, it postulates that we live within an inner circle of human need, i.e. housing, food, etc. and the outer circle, which is the ecological ceiling of our planetary home. Between the two circles are the ways in which we can have a safe and just life (Raworth, 2017). Raworth writes in Doughnut Economics that ‘humanity faces some formidable challenges, and it is in no small part thanks to the blind spots and mistaken metaphors of outdated economic thinking that we have ended up here.’ Significantly, this year saw Amsterdam become the first city to embrace the doughnut model as the guideline for policy making. Post-Covid, it has offered an experimental way to meet the needs of citizens without further degrading the planet. It is an example of where a certain set of circumstances have created the window of opportunity for change. The doughnut model has been scaled down to create a ‘city portrait’ which shows where needs are not being met and can encompass everything from housing to imports.
In summary, if we examine the ‘inconvenient truth’ again, it is indeed a major inconvenience for the few, but in light of world events in 2020, it might perhaps be the most convenient – and opportune, time to rethink and reshape our world. The facts are simple; we need to decouple from carbon usage which has created the problem of global warming in the first place and shift our expectations around our entitlement to excess. It might just be the best time to release ourselves from the stranglehold of capitalism and consider alternatives. There can be more than one narrative. In the same way that monoculture is a disaster for the natural world, a single system way of living has also been a disaster for humanity. What is encouraging is the global mass social movement on climate change. A space has been created where new ideas can be formulated and incorporated into policy and everyday life. This is already happening, and has been for a long time in movements such as transition towns and more recently, there has been a major influence from Greta Thunberg and her Fridays for Future campaign. As Naomi outlines in ‘This Changes Everything’, the uniting of indigenous groups in a common cause, and social movements around the world, can both be a very powerful force for change. Technological connectivity has also opened up new possibilities for global change. Social media can be a double edged sword and used to further the status quo but it also allows for that integration of ideas around the world. Working from the ground up can often be a better tool for implementing change, as the people involved are invested on a personal level and have a connection to the projects. Grassroots movements are also able to operate outside the framework of bureaucratic hesitancy and can therefore be more effective on a smaller but widespread scale.
It seems appropriate to conclude with the words of Klein:
‘All of this is why any attempt to rise to the climate challenge will be fruitless unless it is understood as part of a much broader battle of world-views, a process of rebuilding and reinventing the very idea of the collective, the communal, the commons, the civil, and the civic after so many decades of attack and neglect.’
environment Environmental Justice environmentalism Naomi Klein This Changes Everything
Next Post Previous Post
No Comment
Add Comment
comment url
capitalism,Degrowth,Doughnut Economics,environment,Environmental Justice,environmentalism,Naomi Klein,This Changes Everything