Donegal, of course, is one of my favourite places to visit, pretty much my favourite place in Ireland actually.  This year's holiday was as amazing as ever but we branched out and also visited Fermanagh and stayed in Lough Allen Hotel in Drumshanbo and had a picnic and dinner in Carrick on Shannon.

So roughly in chronological order I'll share some of our nice holiday experiences and recommend some places to visit.
Carrick on Shannon is picturesque and lovely - for some reason though, we have never stopped there for any length. This year we did as we were firstly going to stay in the Lough Allen Hotel and it seemed like just the right place for our picnic. Crusty bread and melty cheese with coffee from a flask, sitting by the river Shannon - I think it was probably my perfect definition of heaven :)
Carrick is just so pretty and I was extra impressed with the Tidy Towns planting and work for biodiversity. It is incredibly heartening to see this continuing move away from manicured neatness and towards a wilder and more diverse and beautiful approach to planting and conservation. 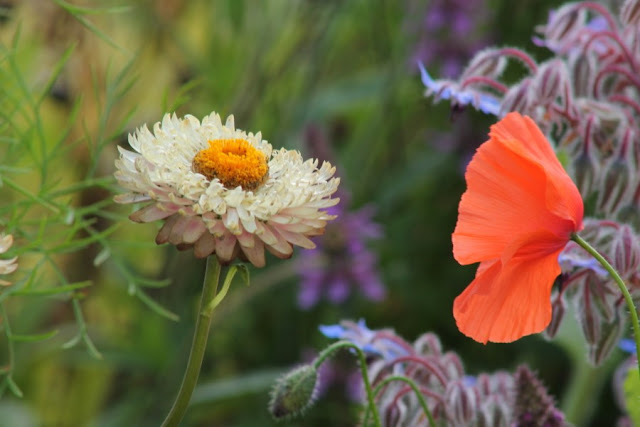 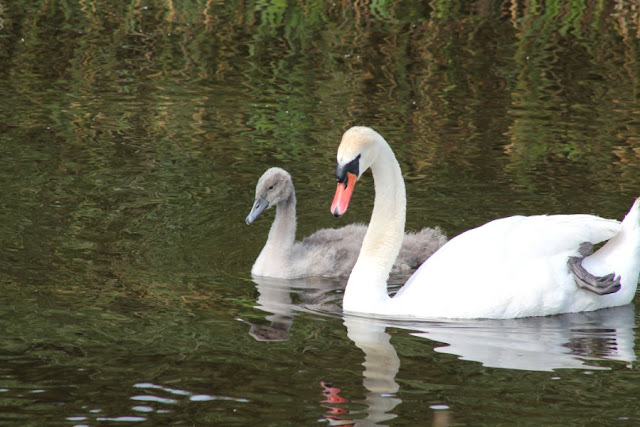 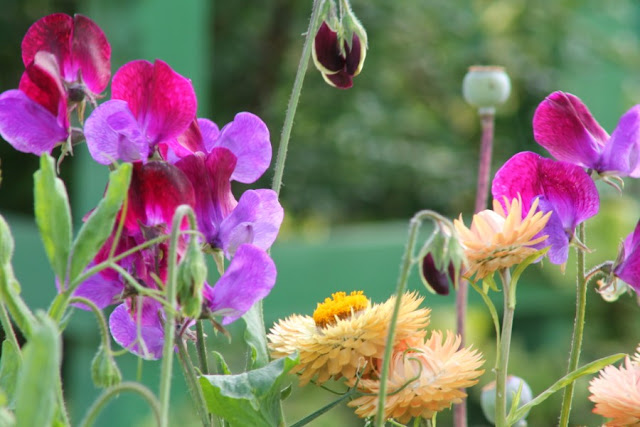 We had dinner later that evening in BR Bistro which was very nice, absolutely delicious food, good service and a nice quiet atmosphere - one downside of Carrick is that it is a big hen/stag venue so if you are like me and prefer to avoid the exuberance of the groups, this was a great alternative on the night we were there anyway.
The first excursion of the holiday was to Cuilcagh and the Legnabrocky Trail.  I have to confess that I am not really a hiker, I love to be outdoors but I do find endless trudging a little bit boring, and prefer to go for a quick run anyday! However, as it was a joint holiday, some compromise was necessary :) It is an amazing walk, the views are gorgeous and if you are a hiker, this is well worth doing. It's a 14.8 km round trip - I didn't do the final steps to the summit because I'm not too fond of heights but Mark did and it just looks incredible. (The trail is about 46 min drive from Drumshanbo). 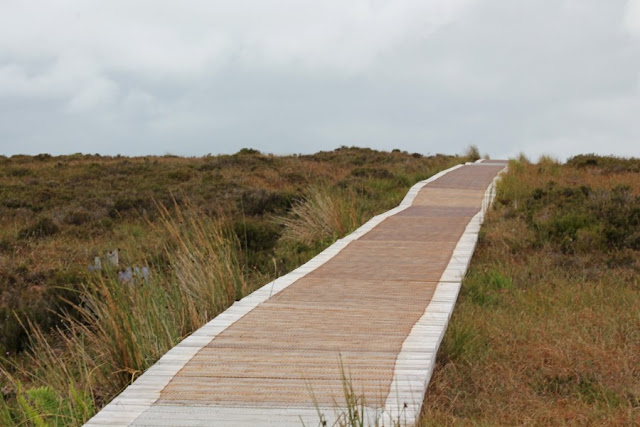 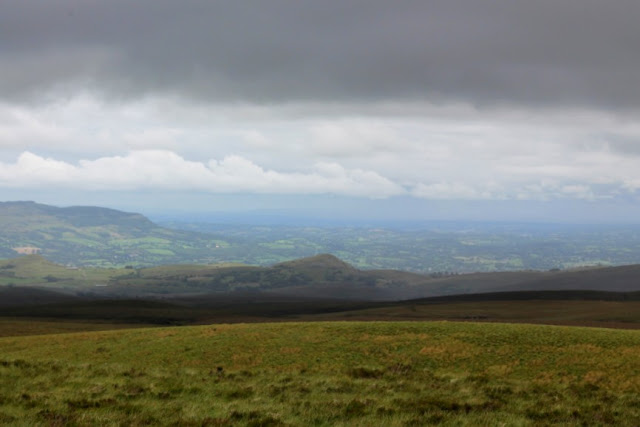 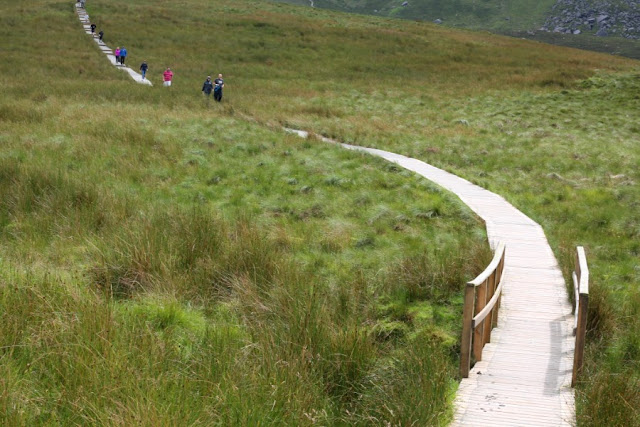 I was pretty tired after that I can tell you! Do follow the advice given, wear appropriate footwear with a good grip, bring water and don't wander off the trail. It gets cold and windy surprisingly quickly so even though you can be hot from walking, it's good to bring something warmer to put on and some light rain gear.

Our next spot to visit was more sedate but somewhere I have been meaning to visit for a long time as I see the signs every time we go to Donegal.
Boyle Abbey is about half an hour from Drumshanbo and was en route to Donegal so it was the perfect time to see it.
It is a Cistercian Abbey, built in 1161 (the first Cistercian Abbey in Ireland was Mellifont Abbey in County Meath)  It was converted into a barracks by the Elizabethans in 1592 and it was then besieged by the Cromwellians in 1645. Despite all its trials, there is still a strong sense of elegance and beauty in what remains and the joy of history, for me, is that feeling of standing in the footsteps of those who have gone before. I could imagine the tranquil routine of the monks and the craftsmen busy at work. There is a tour available and a small exhibition upstairs in the gatehouse. The carvings are really worth noting, they are elaborate and interesting and there is a Sheelagh na Gig, which I found unusual but apparently these were incorporated into Christian buildings also. 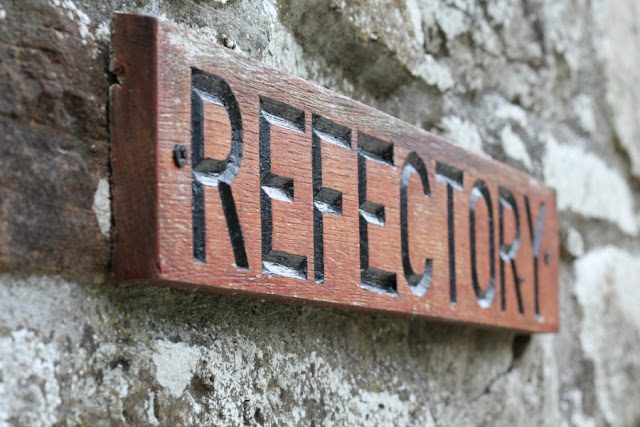 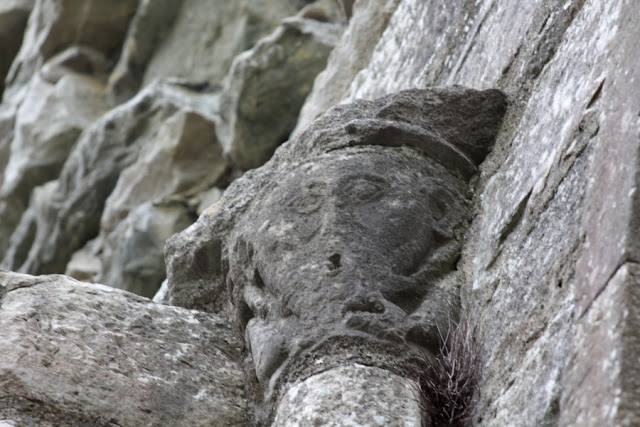 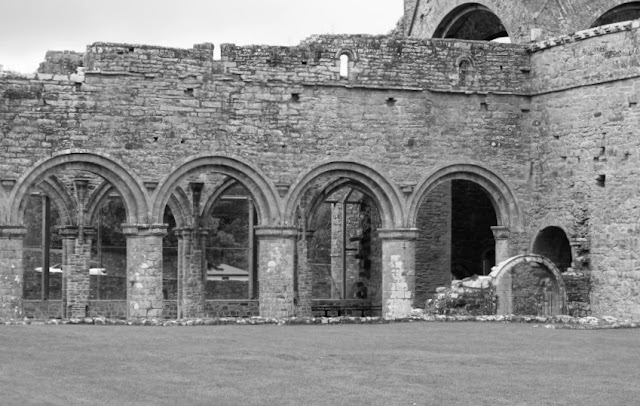 Onwards to Donegal and so many familiar places that we love. The weather was great, we swam almost every day and we also did the Slieve League walk which I hadn't done before. This is not the grand trek that Legnabrocky was, it's a much easier walk with spectacular views and the path is fairly manageable. You do get the weird weather variances though, so at points I was switching from vest top to jumper every 5 seconds it seemed! This walk is approx 3k plus walk from car park and back (I clocked up 8k on my step counter which might give a better idea). These cliffs are amongst the highest in Europe and 3 times higher than the Cliffs of Moher at the highest point. 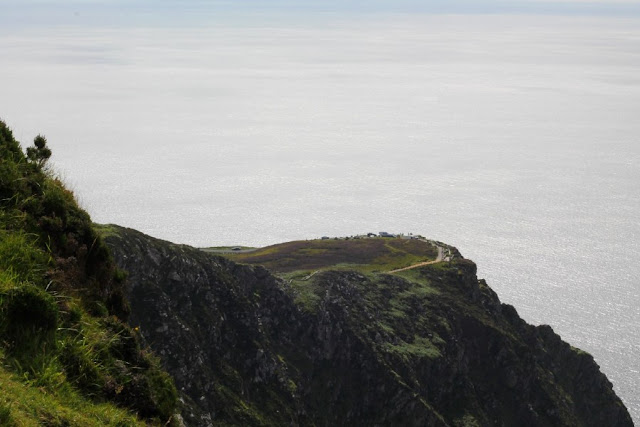 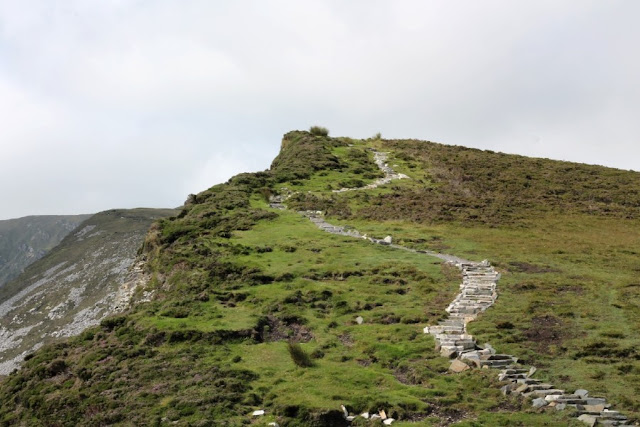 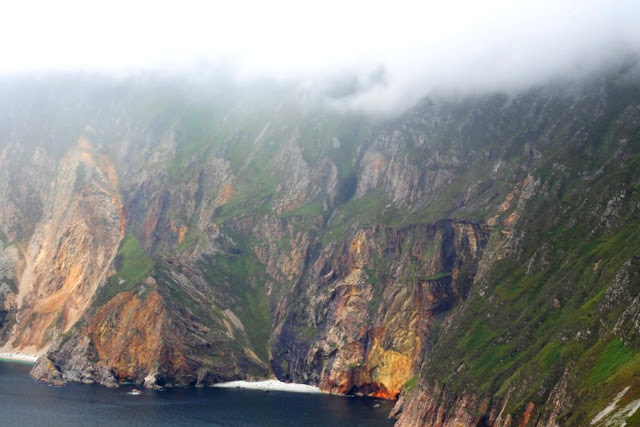 Another new place we went to was Lusty Beg Island Resort in Fermanagh - it's a resort on an island which is accessible by a short (few minutes) ferry trip. The resort is a gorgeous spot on Lower Lough Erne and we had lunch there and a walk around the lake. It was very pleasant to be sitting out in the sun with a lakeview. 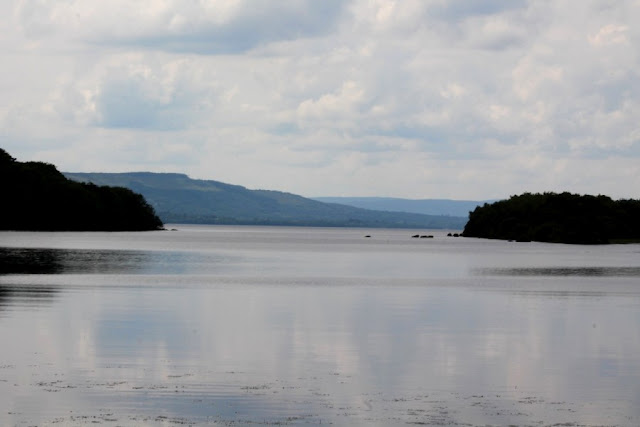 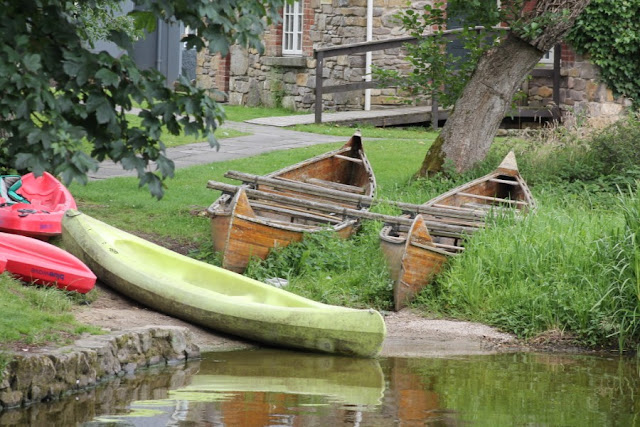 We then went on to Boa Island to see the boa island figures in Caldragh Cemetery. The date of the figures is not exactly known although the cemetery dates from the Irish Early Christian period. The larger of the statues (pictured below) is a Janus figure because of the two faces and the smaller (thought to be older) is possibly a precursor to the Sheelagh na Gigs. 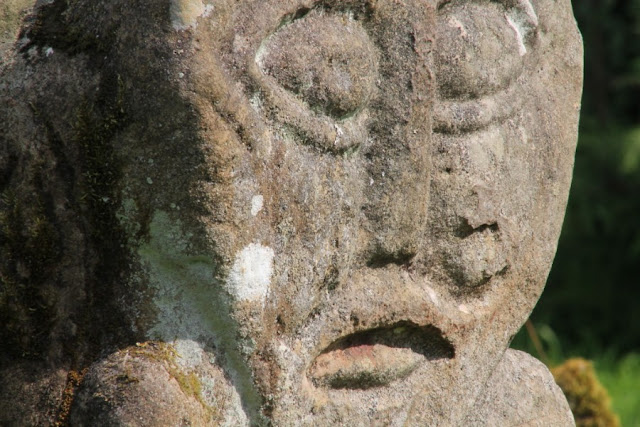 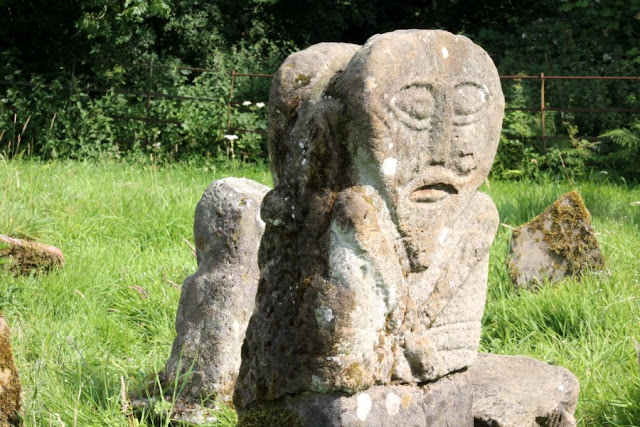 They are fascinating from a historical perspective and well worth going to see.

Well I am almost coming to a close, we had a wonderful holiday and saw and did lots more besides the special places I have mentioned. Hopefully you have enjoyed this post and have maybe gotten some ideas of places to visit. I will leave you with some of my favourite pictures of our holiday, that represent to me the beauty of Donegal. 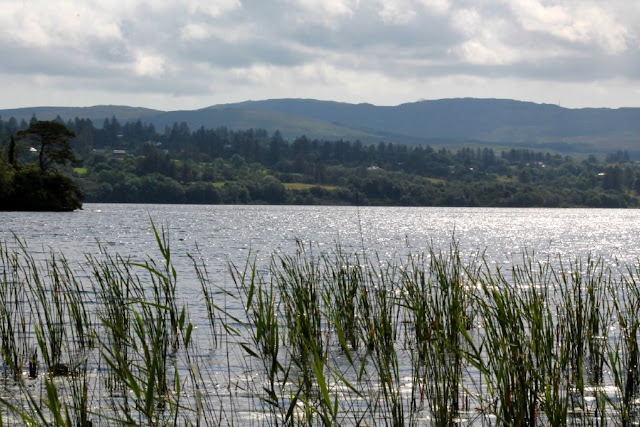 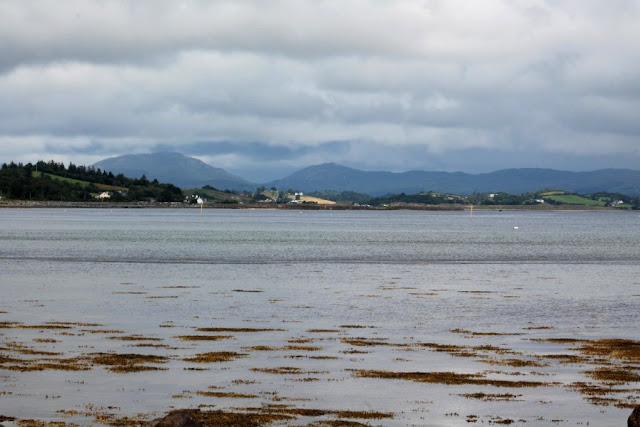 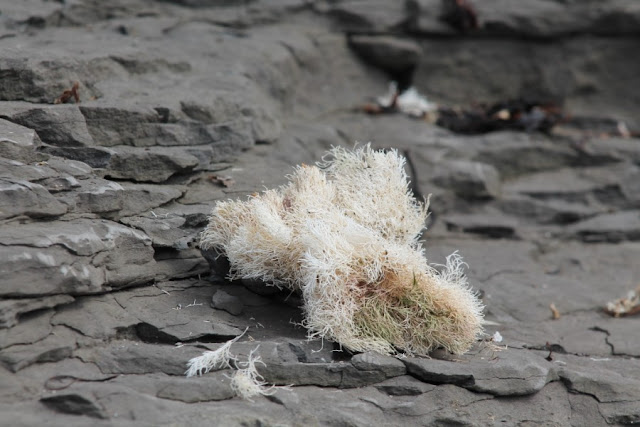 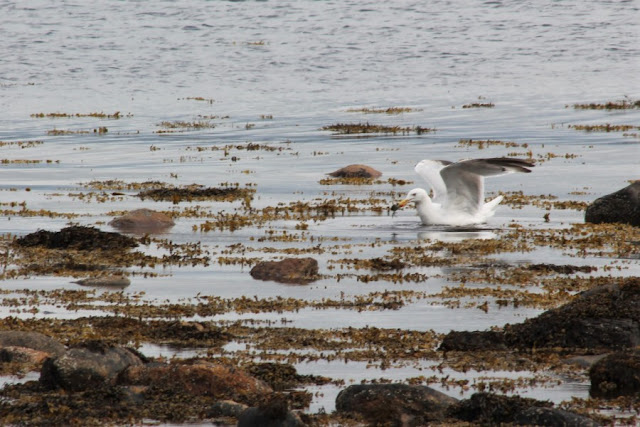