Rant series – putting women down.
Another in my rant series and one of my own for a change! 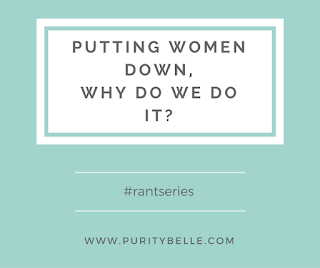 This is something that has been on the periphery of my mind for a while and a few situations brought it to the forefront recently. An overheard conversation, the election of Trump and attitudes to my own dress highlighted a sad fact for me, namely that women very often critique other women in a negative way.


It made me question why and why it is that I often feel uncomfortable in groups of women that I don’t know very well.  You can take 4 or 5 individuals who might be lovely to talk to on their own, but combine them in a group situation and some kind of herd instinct seems to take over. The jockeying for attention and the unspoken judgement, the unconscious checking to see what’s acceptable and what isn’t, all are things that make me feel profoundly ill at ease.


It could be dress, parenting, work, any combination of those but that particular dynamic makes the very thought of a ‘girl’s night’ anathema to me.


And I wonder why things are still this way? I understand the competitive instinct that human beings have, I can be very competitive in lots of ways but I am disinclined to judge people on dress because how you dress is an expression of yourself.  Unless you are desperately trying to fit in or emulate some kind of ‘ideal’ woman as portrayed by media.  In which case, other people’s judgement makes more sense to me.  If you are trying to fit in and want everyone else to be in that sinking ship, then anything different is a threat.


It’s a big two fingers to the status quo that you are entrenched in, so, resentment of anyone who has liberated themselves from that is a logical conclusion.


Trying to process the election of Donald Trump to the presidency has been difficult, for me and for most of the world. One of the most startling revelations of the proceedings, for me, anyway, was that many women voted for Trump – white women, black women, Hispanic women.  Not so unusual, perhaps, had he been the usual run of the mill candidate but the fact that his campaign was laced with misogyny, racism and bigotry makes that fact extraordinary.  It beggars belief honestly.


I can only conclude that misogyny is so deeply rooted in our culture, that this kind of Stockholm Syndrome response seems normal – supporting someone who has effectively said that he hates you, handing him the power and the tools to enforce that hatred and spread it to an entire nation defies any kind of logical thought process.  So it can only be a culturally engrained thoughtless instinct to obey and accept.


Women judging women somehow seems a lot more tragic to me than men judging women.  It’s a denial of our common experiences, both positive and negative.  And I feel also that it’s a lack of strength and ego, an uncertainty of self that is probably largely due to cultural and societal influences over the centuries.  And this is something that we need to constantly question and fight against.


Whilst I don’t believe that I’m going to be best pals with someone just because they are female, I think it is important to stand together and to fight against inequality and sexism as a united group and to always QUESTION and think before we rush to judgement and criticism.