This is another in my Rant series and I have to say I have been really happy with how this has been going - mostly because it has given me the opportunity to read and share some incredibly articulate and impassioned views.  I feel truly honoured to be able to give a space to people to express their feelings and views and this particular post is beautifully written and honest. It touches on a subject we all need to be aware of and bring out into the open. It is entitled 'A Conversation' at the request of the author and I think it fits perfectly. The author prefers to remain anonymous but if this is something which has affected you I am happy to pass on any messages of support or affinity. 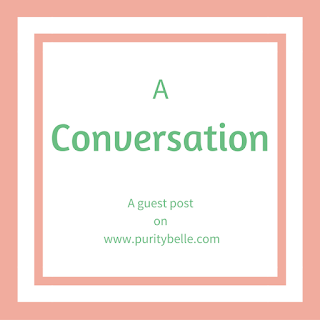 How old were you when it happened to you? I was 7.

How long did it take for you to tell someone? I didn’t tell anyone until I was 30. 23 years later. I told my best friend one night by accident. I didn’t mean to, I just blurted it out and even then I told her I wasn’t sure. But of course I was sure. You don’t forget. You hide it away in a dark corner and build walls around it, and you don’t even look at it for fear it might come out. Telling someone put a crack in the wall and eventually the crack widened to become a flood. I couldn’t keep it hidden any longer. But it was a long process and, and even now I don’t broadcast it. My parents still don’t know and I’ve never gone to the police.

But why did it take you so long? You should have said something much sooner. So many reasons. All of them valid and all of them different for each person. I’ll try to tell you one or two of mine. You might have no concept of what sexual assault is at that age but you know there is something profoundly wrong with what is happening. It is incredibly easy for someone to manipulate that and make you believe it’s your fault. And then you spend years hearing what society is saying ‘If you didn’t fight it you must have wanted it’ ‘Well don’t be too friendly’ ‘It’s what you were wearing’ and so on. I didn’t fight back. I was a fairly chatty affectionate kid. Even though logically you know as an adult it’s not your fault, you absorb those messages almost by osmosis. You take them in and they become so ingrained that a part of you does start to believe it was your fault. And the echo then for me down through the years was ‘I did a bad thing.’ It took some time to get rid of that belief.
And then there was the fear of not being believed. He was a well respected man. A fine upstanding member of society. Who would take the word of a 7 year old over him? To this day, if I was to tell my story there would be flat disbelief and outrage from some people that I would dare accuse him. Even now I don’t know if I’m strong enough to face down that level of abuse.

It doesn’t happen that often though Yes it does. One of the saddest things about this was that when I did start telling people, the amount of times someone looked at me with tears in their eyes and said: ‘Me too.’ People I was close to. Friends I had known for years. And in too many cases I didn’t know this terrible thing had happened to them. It’s an epidemic of buried painful secrets. We keep it hidden. We tell no one. It takes an enormous amount to tell even one person. And the telling does not get easier. The pain of it still catches me off guard.

You know it was a long time ago. You really should move on. I’ve had counselling. I sat in a therapists room and I wailed and gnashed my teeth. I screamed with rage and howled with grief. It won’t eat me up with anger or bitterness. But it never goes away. It is a piece of you that is there forever. And most days it’s normal sized and it’s just one small part.  And you can live your life. But other days, bad days, it is oversized and has jagged edges and it cuts you raw. And you have to find ways to live with it.

But why are you angry some days? Maybe you shouldn’t be so sensitive: Because even though we all proclaim loudly that rape and sexual assault is a terrible thing, it’s still endemic and it’s getting worse. Because when a person makes an unwanted advance, its minimised and passed off as jokes or banter and you’re just being a bit hysterical by objecting to it. And when it’s taken further and leads to assault, it was somehow your fault for letting it happen. Because you drank. Or wore a skirt. Or were in the wrong place. Or you didn’t fight back. And when victims do come forward they are shamed and humiliated and picked over by experts and pundits and commenters acting like vultures. And so the message is sent that people can get away with it. Or that consent is a ‘grey area.’ Or that you don’t have to responsible for your own actions.  And those who have been hurt by this terrible thing shrink back so as not to cause themselves further pain. And they build walls to hide behind because they are told over and over and over that they are to blame for letting this happen. And it makes me profoundly sad. And it makes me rage that in 2016 we still need to have these conversations. How much does it fucking take? Why can’t you see that this has to stop? How much more pain do you need? How many more victims?
But you know what? You with your stupid misconceptions, and your ignorant assumptions. You’re a dying breed. The more we stand up, the more we fight back, yes even the more we rage; we show that this has to stop. It will get through eventually. And we hold our hands out to those who have survived and we say, you are not alone. We believe you. We love you.
speaking out
Next Post Previous Post
8 Comments
Add Comment
comment url
abuse,conversation,rant,speaking out