This topic is one I have been considering lately for various reasons and I was inspired to write about it after seeing a pic on Instagram from Lifeisknutts, where she talks about her shyness as a child. I related to it very much as I was also painfully shy as a child and it made my life difficult, not just the experience of being shy, but being made to feel odd because of my shyness. It was the external reaction to my shyness that was the problem a lot of the time, not the actual shyness itself. 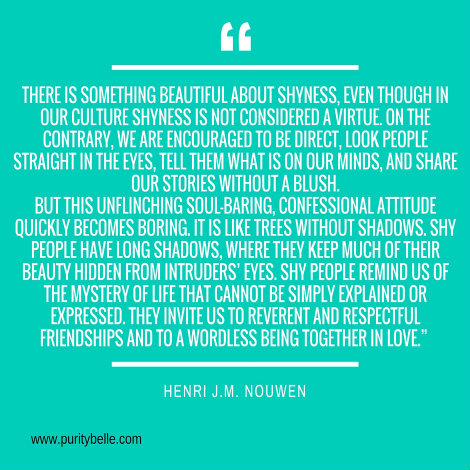 I want to look at this subject because I feel very strongly that the stigmatising of shyness is wrong and misplaced and we need to accept that people have differing personalities and stop trying to change them, especially when it comes to children.
The approach to shyness tends to be how to get over it, how to become more like extroverts so that you will fit in with society's expectations of you. You should overcome it, manage it, deny it, basically stop being this way that makes people uncomfortable.  My feeling on the topic, though, is that it's not my job to make people less uncomfortable.  If someone loud and boisterous makes me uncomfortable, there isn't some unwritten expectation that they should change behaviour to seem more 'normal.
Shyness isn't a sign that something is wrong, it's simply an indication that you have a different way of being, and a different way of expressing yourself.

When my eldest daughter was little, she was also very shy. She was, however, a very happy child - I have loads of toddler pics of her with a big smile, enjoying whatever she was doing.
I did worry about school though, and whether it might be too much. We made the decision to send her to a Steiner Kindergarten, and then to the Kildare Steiner School. We actually moved house to be near the Kildare Steiner School. Our reasons for choosing Steiner Education were manifold, the small class sizes, the emphasis on nature and art, the beautiful location. The main reason, however, was the fact that it is very child centred and accepts different personalities. I never once felt within the school that either of my girls were treated as odd because they were shy. Their personalities were nourished and encouraged and accepted just as they were. Both girls had friends and happy times and weren't in any way hampered by their shyness whilst in primary school.

My experience of Second Level has been slightly different though and it has been annoying me lately that my younger girl's shyness seems to be an issue, not for her but for the teachers.
There is a strange preconceived notion equating shyness with problematic behaviour. I don't want to misrepresent either because she's praised for academic achievement but the shyness comes up as a regular issue.  It is strange how it generates such a negative response and knowing my daughter very well (obviously!), it doesn't reflect who she really is at all.  She's creative and bright, has a wicked sense of humour, lots of friends and loves music.  She just doesn't feel comfortable putting herself forward but that's totally ok!

Being shy isn't a problem unless you really feel that it is hampering you and you want to change it.
I completely dispute the equation of shyness with lack of confidence.  Again, there is a societal vision of confidence as someone who is brash and 'out there', advertising themselves, speaking loudly, being the leader, etc. That person may be confident and happy but it's equally possible that they are not and wracked with self-doubt but putting on a 'face' for the world.

I've outgrown a lot of my shyness as I've gotten older but I'm still a very quiet person. I'm happy to listen rather than speak a lot of the time (I'm genuinely interested in other people), certain situations do make me a little uncomfortable, I don't particularly like loud places or loud people for that matter.
None of this means that I lack confidence - I'm actually super confident and happy with the person I am. I see the same confidence in my daughters, they have an inner quietude and resilience that I see all the time. My eldest is now doing amazingly well in Art College, loving the whole experience and she shines with confidence.

There is a prejudice against shyness that I feel is ill-judged and mistaken.  Shy people can be perceived as weak or snobby or sneaky even! A lot of this prejudice comes from people with little imagination or insight - these people like to fit everything into acceptable little boxes and if they can't make you out, they will put a negative spin on it.

Many times in my life people have made assumptions about me, based on my quiet nature. When I was younger, many people told me that they thought I was a snob until they got to know me. People have also seen my quietness as a kind of passivity. This one in particular is hilarious because I'm 'fight to the death' tenacious and determined when I feel strongly about something.

My eldest daughter has also come across a bad attitude to her shyness. She was in a drama group (she has a fabulous voice) full of super peppy stage school girls who wouldn't give her the time of day because she was a little bit different to them.
On another note, she also stunned everyone in her school when she played the lead in the Transition Year musical.  Despite being quiet in school, she stepped up there and sang her heart out, with not the least problem! I think quite a few people were astonished that she had been hiding her light under a bushel for so long :)

BE PROUD, DON'T APOLOGISE, BE YOURSELF