Recently I was invited to a special screening of Suffragette, organised by Fiona McLoughlin Healy and shown in the Odeon Cinema in Newbridge.  I am a proud feminist and I had been looking forward to seeing this film anyway so I was delighted to get the invitation.

The fact that I was to be part of a group of 250 women made it even more special for me as it felt like a celebration of togetherness and of how far women have come since the days when such a basic right was denied to us.

The film itself was outstanding, I hadn't read any reviews at all and was just aware that Meryl Streep was in it and that there had been some online controversy about initial publicity for the film. The slogan 'I'd rather be a rebel than a slave' was seen as racially insensitive by some online commentators, despite the fact that it was a quote by Emmeline Pankhurst and deemed appropriate for the film by its publicists.

Carey Mulligan gives a fantastic performance as Maud Watts, the laundry worker turned revolutionary.  For me, she epitomised the quiet rebel who stands on the sidelines until circumstance creates change and brings her true strength to the fore.
It's hard to imagine the environment and relentlessly harsh conditions that women of working class backgrounds experienced on a daily basis, at this time in history. With no prospect of escape or improvement, the vote becomes a symbolic escape for Maud, a hope that women may someday have the possibility of controlling their own destiny.
We watch her journey and the unfolding of her passion and commitment to the cause, fuelled by the harsh treatment and judgement meted out by society and by her own husband, who eventually bars her from her home and denies her access to her own son.
Extraordinary though it may seem, women had literally no rights over their own children and were at the mercy of the goodwill of their husbands. A heartbreaking moment was when Maud returns home briefly to try and give her little boy a handmade toy for his birthday.  He is standing there, tiny and bewildered and a strange couple are about to take him away for adoption. The cruelty is distressing and this is how helpless women were - no matter what their character or needs, their lives functioned according to the whims of the men in their lives.
Meryl Streep appears only briefly in the film as the legendary Emmeline Pankhurst, leader of the suffragette movement. Her appearances, although short, convey so much of what Emmeline must have represented to the female population of Britain, an inspiring voice and charismatic leader who changed the world for women.
I have to say that the film moved me enormously, it was hard not to feel proud of the incredible tenacity and commitment that brought such positive change.

Having said that, there is still so much more to be done. Following the film, there was a panel discussion. Members of the panel were Senator Cait Keane, Head of Safe Ireland, Alison Bough, President of Network Kildare, Jacinta Carey, Senator Catherine Noone and Claire McGing, Lecturer at NUI, Maynooth.  What was highlighted above all for me, is that we have a society which is, as yet, still far from equal and gender discrimination is an ongoing issue which must be tackled.  Irish women earn 17% less than men.  Studies show that in a situation where exactly the same CV is submitted by multiple applicants, those with male names are far more likely to be called for interview.
What this means to me is that the weighting of our voices is different to those of men, the perception is that we are 'less' somehow. An interesting question asked by an audience member was 'are women perceived as having a deficit?' I think this is at the crux of the matter.  Women have to work longer and harder to get the same recognition as men and this is before we even begin to look at the position of childcare and family supports.  I personally feel that we, as women, have to work together to combat this, to continue to create change and be conscious that the world we live in, with all its prejudice, is that world that our children will inherit.

I will leave you with these two fantastic quotes, which were showing on the slideshow presentation during the panel discussion:

'A world full of empowered women isn't one where men are marginalized.  It's one where everybody thrives.'
Purnima Mane

'Gender equality is more than a goal in itself.  It is a precondition for meeting the challenge of reducing poverty, promoting sustainable development and building good governance.'
Kofi Annan 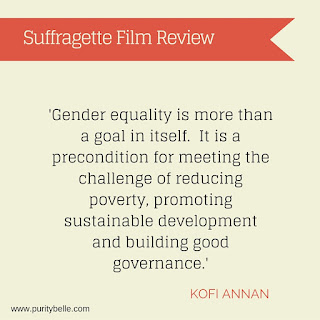