You'd have to be living under a rock not to be aware that the refugee situation/problem/crisis, call it what you will - is a huge news topic at the moment. That's not surprising.  The fact that so many human beings no longer have a safe place to live and need help is a humanitarian crisis on a massive scale.  Reading this BBC news article on Syria, I was shocked to see that over 4 million people have fled Syria since the start of the conflict. I can't even imagine the terror and fear these people have experienced, it literally is beyond my imagining.

What I do know, though, is that every human being should be allowed to live in safety and dignity, have enough to eat and a roof over their heads.  I feel incredibly privileged to live in a country which is safe, where my rights are for the most part respected, where I can voice my opinions and democratically select our country's leaders.  I take it for granted most of the time and then when I see how others are suffering I thank my lucky stars that I'm so blessed. 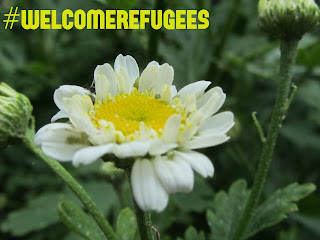 Which brings me to the point of this blog post. I have been uplifted by so many positive stories of people donating and offering their time. What has not been so edifying, though, is the amount of racist posts I have seen in my Facebook timeline. To say that I'm disgusted actually doesn't even cover it. In fact, seeing one more of these posts this morning led me to put the following message up as my status:

'Ok I'm unfriending anyone who shares racist crap from now on because frankly it's offensive and I don't want to see it on my timeline. I don't want to see ridiculous 'homeless vs. refugee' bullshit. I also don't want to see 'all those foreigners with different coloured skin must be terrorists and are coming to blow up our countries' nonsense. Seriously, what kind of morons buy into that crap.'

It was a bit of a 'last straw' post but I meant it. It's astonishing how many people are willing to regurgitate gutter press right wing sentiment without question. Many such posts are prefaced by the classic 'I'm not a racist but..' statement.

Wait a minute though, you know what? You ARE a racist.

From the Oxford Dictionary Online:

'Prejudice, discrimination, or antagonism directed against someone of a different race based on the belief that one’s own race is superior:'

We're not superior, through blind chance and fortune we have our safety and prosperity and I firmly believe that this should be shared with others, who, through no fault of their own, are fleeing for their lives.

And don't get me started on the laughable posts professing all sorts of concern for homeless people. Not that concern for homeless people is laughable - the point is, that this newly found human kindness is a red herring, designed to obfuscate the clear message that refugees are NOT welcome. It is not an either/or situation where we get to decide who is more deserving. Everyone is deserving, that is the whole point.

Trying to make us believe that refugees are different to us, not as good somehow, possibly terrorists or criminals or maybe just selfish people who want to steal our jobs - this is a technique used by those who hate to make us hate too.


I'm deeply disappointed that so many Irish people are willing to accept this without question
and I have no desire to be virtual or real friends with anyone who feels this way.

Some links to info or pages where you can offer help or donate:

Five things you can do to help Syrian Refugees, Irish Independent